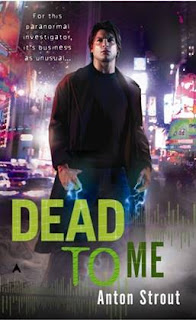 In a little place called cyberspace, Writers of the Future winning author, Brad Beaulieu, posed some intriguing questions to Anton Strout, the author of Dead To Me.

Your first novel, DEAD TO ME, is due out in February 2008 from Ace Books. Give us the elevator pitch, if you would...

Excuse me. Sorry.. it's so crowded in here. Sorry! Wait, what button did I press? I meant to hit five. shit, is this four? So let me tell you about my book.

What was it about Simon Canderous that made you want to write about him? What was it about his character that changed the most from your initial conception? And most importantly, who would play him in the movie version?

I want to write about Simon because there's an image that's always stuck with me from The World According to Garp, actually. There's a short story from it that talks about a man with magic gloves who can't feel anything himself while wearing them but could change the world. I found that particularly haunting and sad. but it kept gnawing at me. And one day I wondered about a guy who wore gloves to fend off his own feelings and much of the world because he had a magic that he couldn't control. Then I watched a Buffy marathon and thought what if Simon found a group that would help him work on it while letting him use a retractable bat to beat the tar out of things that go bump in the night? The rest, as they say, is history.

I think the thing that changed most when writing Simon is that he turned out not to be as squeaky clean as when I started. I think this was due more to my wanting readers to like him a lot so I made him uber likable. Problem is, people aren't like that. they're messed up, emotionally retarded, making bad choices all the time.. and why? Because they're human. So, I wrote in a lot of his issues just getting through his day or figuring out how to pay rent and he became much more likable simply because he suddenly seemed real.

Oh, and thanks to my cover artist, I can only imagine Jerry O'Connell playing him now.

Are you a plot-first guy or do you take more of an organic approach to your writing? Either way, what was the biggest surprise in the writing of DEAD TO ME?

I don't like to plan a book out too far ahead. I don't outline because once I outline a whole book, it actually kills the urge to actually write all the points from A to Z along the way. I rarely know the end when I start. For me, it's the journey, not the destination, that is the fun part, so I take writing a book chapter by chapter, not necessarily in order though. Once I'm done, I go back through the skeletal plot and fill in all the fleshy bits.

The biggest surprise in writing DEAD TO ME? Hmmm. *thinks* I think it was the overall world I created. It's much larger than I imagined. to the point where I have the next several books in the series planned out a bit this time around. I like the Department of Extraordinary Affairs. There's a lot of doors back in their shadowy office and I have an inkling of what's behind several of them already. The rest I can't wait to open!

You've said that if people like Joss Whedon, Douglas Adams, or Jim Butcher that they'll love you. What from each of those writers do you try to capture in your own writing?

Douglas Adams is really what got me hooked on reading as a kid. I came to it from the BBC series when it aired on PBS back in the early 80's and I was hooked. When I heard there was a book, I ran out and got it. The humor, the timing, the ripping the back out of a space epic. all of it came to reflect the style I like to work in. I still pick up the four books of the trilogy (yes, that's what I meant to type) every so often and recharge my writing batteries, if only to get my own sense of comedic timing back.

Joss is the brass ring of my whole process, really, but there are two things that stick out that probably influence my work the most. The first is his sense of humor. The man just knows how to push all the right buttons, but he does it with heart in a very honest way. The second has to be his sense of character and I try to come at mine with the same approach. For me, DEAD TO ME is about real people trying to live real lives in a world can get a bit unreal and nightmarish at times. These are people trying to make a paycheck, date, get some control over their lives. oh, and fight things of Lovecraftian proportions. Joss does it so well and it's what I strive for also.

Now Jim Butcher I intentionally went out of my way to avoid reading while I was working on DEAD TO ME. I work at his publisher and from what I was hearing in-house, I was apparently working in his milieu. Only after I had finished my book did I crack him open and I discovered a lot of similarities. he's noir-ish, funny, based in the real world with little twists here and there. oh, and there are lots of pamphlets in his work too!

Perhaps a more interesting question would be what you *didn't* take from them. That's not to say that they write poorly in any way. Far from it. I only wonder what it is that they do that you didn't feel meshed with your own writing style.

You've been known to bash on NaNoWriMo, with the belief (paraphrasing heavily here) that people shouldn't simply write for a month; they should write all the time. If you could start your own writing movement, what would it be and what would you call it?

I bash on NaNoWriMo so much because although I see a lot of people getting a lot of words down on paper, those words tend to suck . . . and suck hard. In a lot of ways, the process brings a lot of bad writing habits to the surface. Writing is a job, a fun and rewarding one, but there's a discipline to punching the clock every day for it. A lot of people do it for fun and whatever that's fine, but I see a lot of people online who really do wanna be writers and they crash and burn with this arbitrary deadline.

My motto, which I like scream at John Helfers a lot, is "Write, Monkey, write!" Cuz that's the trick to writing!

If I had an established program, I think I'd call it You Suck Because Your Writing Sucks. It would be a very blunt look at how to get your act together for the slackers, the wannabe, and of course, the NaNo'ers. It would be the tough love, scared straight approach to helping people finish what they started. and be proud of it.

You've worked in publishing for a while, and now you're seeing it from the author's perspective. Who do you think, in the long chain of people that get involved in a book's production, is the most unheralded?

I'm gonna go with editors on this one and that's coming from a long list of jobs that make a book happen. They're really the unsung heroes of the industry. Every part of a publishing company is a vital cog in the machine, but if you're going to be an editor, you have to really love it. The pay generally sucks, you're always carrying home two or three manuscripts when you leave work. if you leave, that is. The hours are lonnnnnnng. But they make us authors look good. I think I'm gonna owe mine a pony or something.

Who would you give gold stars to in the production of your own book?

Damn, there's so many people.but I do work for the sales department and I gotta go with them. They really went out of their way to make sure I'll be well represented across the country and I couldn't be more proud to be a part of them.

You formed a group with several other fellow writers called The League of Reluctant Adults. Why did you form this group?

Because shamelessness loves company? I was actually asked to join because we were a bunch of light hearted urban fantasists all looking for ways to promote ourselves. It just made sense to band together, and I have to say I'm in good company over there. We do interviews with authors or people in the industry and each of us has a separate day when we blog on whatever topic strikes our fancy. They crack me the hell up. Except that Mark Henry. He's a dirty bitch and should be treated as such.

Now that it's been up and running for a while, have you found that it's added anything unexpected to your writing life? Or even your personal life, for that matter.

Being part of the League gives me a little bit more mental stability. Writers are an insecure lot and justifiably so. We spend long stretches by ourselves creating something and all kinds of neurosis can develop in that process. It's nice to have a place where I can vent about stuff, encourage discussion or just have a good laugh. Plus I have a place to steal really good ideas from!

Before we close, can you give us a teaser for where the next Simon Canderous adventure is going to take us?

Without giving away too much of DEAD TO ME, the second book, tentatively titled BACK TO LIFE includes many of the following:

And much, much more! Stay tuned, true believers! And for the curious, a tie-in story to DEAD TO ME entitled "The Fourteenth Virtue" will appear in the July 2008 anthology THE DIMENSION NEXT DOOR.


To learn more about the strange and macabre life of author Anton Strout visit him online at http://www.antonstrout.com/. Please email him and ask when he's going to upload audio files of himself reading DEAD TO ME in the voice of Christopher Walken.
Posted by Paul Genesse at 7:35 PM 3 comments:

Labels: Anton Strout, Dead To Me

Jean Rabe has a big list of websites that can be of great use to writers. Check them out and have fun surfing.