Review of Voices: Tales of Horror 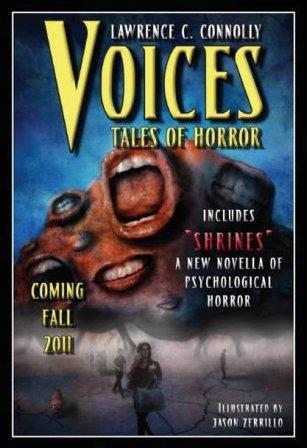 Voices: Tales of Horror by Stoker Award nominee Lawrence C. Connolly is a brilliant collection of short stories by a master writer. The thirteen stories are all memorable, and you can tell right from the start that you are in the hands of an exceptional writer. It’s easily understandable why so many horror and fantasy magazine editors bought these stories over the years, and why Connolly has received so much praise from the critics. I also very much enjoyed the short background essays/commentary on the stories that are interspersed between the tales. The illustrations by Jason Zerillo are also top notch, but the real gems are the stories themselves. I’ll mention several of them briefly in this review, and will leave you to peruse the reviews on Amazon for more, as they capture perfectly the essence of Connolly’s writing.

“Lesions” is a creepy story about a very bad man with a horrifying condition, tiny mouths with sharp teeth have appeared all over his body. He ends up looking for help and goes to a place where he thinks he can get it. Here’s the first line: Todd studied her, gauging the size of her head, breasts, and hands, imagining how they would look arranged in a crystal bowl.

Great opening line and the writing is impeccable. Connolly is a master of stripped down prose that is at the same time deep and emotional, but not cluttered, or overdone.

“Smuggling the Dead” is a fascinating story about an American hired to smuggle something very mysterious out of Russia, a small black cube made up of . . . well, you’ll have to read it to find out exactly what it is. The behind the scenes story about this one was also very intriguing and chronicles a trip Connolly made to Russia years ago.

“Decanting Oblivion” is about a bicycle messenger with a drug problem in a bizarre future Earth that has no-sleep factories where the workers go non-stop, as their need for sleep has been taken away. There’s a lot more to this story, and it’s very visceral and utterly fascinating. One of my favorites.

“Things” is about a gang of evil youngsters who tangle with the wrong old Italian lady. Sure, the young men had their fun breaking and entering old people’s houses and beating them up and stealing their stuff, but sometimes, you pick the wrong person to screw with.

“Flames” is one of my favorite stories in the anthology. It’s about three college students on their way home for Thanksgiving break, when their car breaks down and they are forced to take shelter in an abandoned house during a snowstorm. This one will leave you shivering, and whatever you do, don’t get too close to the flames.

“The Death Lantern” is literally a Sherlock Holmes story, from a themed anthology about our favorite inspector, and it delivers a bullet to the face. Well, a bullet to the face of a famous illusionist of the day. But is the film footage real? Or is it an elaborate hoax? The story is quite interesting and the new technology of moving pictures is discussed with a rather interesting angle that we who have grown up watching movies may not have ever considered.

“Die Angle” is a story inspired by a Bruce Springsteen song (for a themed collection that draws inspiration from Springsteen songs), and is about a man who returns to his hometown after being gone for many years. He’s going home because he’s been given a contract to kill someone. Chaos ensues and we get to meet some of our anti-hero’s old friends. The town is a really messed up place. The Boss would love this one, I think.

“Beneath Between” is a mind-bending story that seemed like it was one of those chapter interludes where Connolly told about his writing life. It felt so real and for a moment I forgot I was reading fiction. I think writers especially will love this story, as it’s about a frustrated writer who made the decision not to submit his work for too long, and sees how it could have been when he ends up in the most awesome and bizarre bookstore ever.

“Junk’d” is a horror story about a couple of low life a-holes who end up in a car wreck. One walks away, one doesn’t, but there is so much more and this story goes to a whole new level of depravity. It’s so sick and twisted.

“Shrines” is my favorite story in the whole collection. It’s a novella with fantastical and sci-fi elements, and is a magnificent character study of a man who has lost the two most important people in his life. He is tempted by a possible scam that offers to reunite him with his dead wife and child. This story is so expertly drawn that I found myself pulled through the narrative and immersed completely. Few stories are so good that I lose myself, and I found that happened with this one.

I look forward very much to reading Connolly’s novel, Veins, and his other collections of short fiction.

Also, check out this book trailer, which is really awesome and features illustrations from the book.